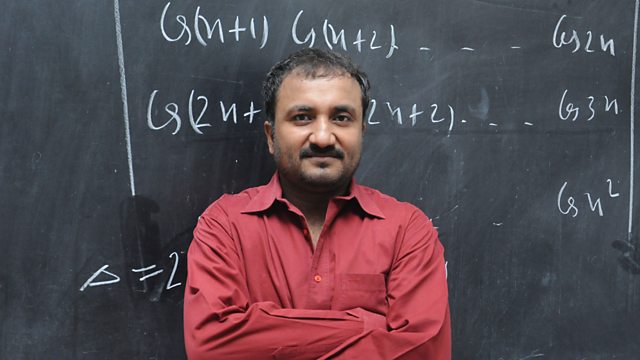 Matthew Bannister speaks to Anand Kumar, the Indian maths expert who's helping poor students to get into the country's elite school.

Today we meet Anand Kumar, a mathematician from Patna, in Bihar, one of India's poorest states. His family struggled to pay for his education, so when he finally overcame the obstacles to become a distinguished mathematician, he was determined to help others. He is the founder of Super 30, a school that offers free coaching to students from poor backgrounds who want to get into India's most prestigious engineering school, the Indian Institute of Technology.

Cuban artist Jorge Rodriguez Gerada has recently completed a six acre portrait on the ground at Washington's National Mall. It's a massive face made of thousands of tons of coloured earth and sand, etched onto a field, that only comes into focus when viewed from above. He says it's a celebration of America's diversity.

And Matthew Bannister meets British film actor Ray Winstone, who has built a career out of playing brutal characters - from a violent offender in Scum, to a wife-beater in Nil by Mouth, and most recently a menacing villain in Noah. But his route to Hollywood has been far from conventional: Ray grew up in a working-class family in the East End of London in the 1960s, learning to hold his own on his father's market stall and later in the boxing ring.

Trapped for 12 Days in a Peruvian Cave