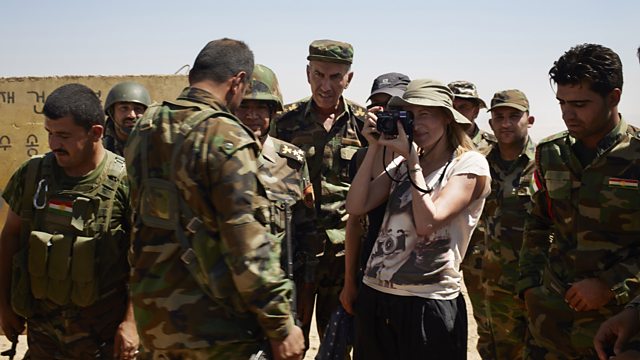 Taking photos in the world's most dangerous places - Veronique de Viguerie tells Matthew Bannister why she tries to find the human angle even in the most violent situations.

For the last ten years, the French war photographer Veronique de Viguerie has taken big risks to get pictures in some of the world's most dangerous places. She's spent time with Taliban fighters in Afghanistan, boarded a ship full of pirates off the coast of Somalia, and tracked the Lord's Resistance Army in the bush of South Sudan. She tells Matthew Bannister that her approach is to find the human angle even in the most violent situations.

Anna Orford is one of the judges from the Guinness World Records Insitute. She describes some of the most challenging records she's had to judge, including abseiling down the side of a huge building.

Author Chen Xiwo is a controversial figure in his native China. His stories deal with dark subjects like voyeurism, murder and incest. His refusal to compromise meant that his books were banned for twenty years in his own country. And he took the highly unusual step of challenging the authorities in court after they banned his collection of short stories The Book of Sins - it has now been translated into English for the first time.

Twenty-year-old Canadian model Chantelle Brown-Young tells us about growing up with the skin condition vilitligo, and why she has never let it stand in the way of her success.