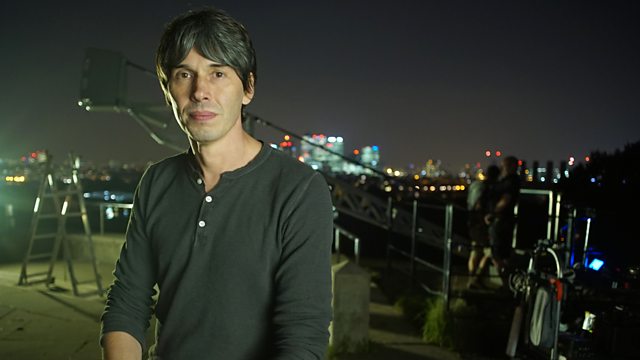 What Is Our Future?

Professor Brian Cox examines what lies ahead for humankind. On Svalbard, he gains access to civilisation's greatest treasure, buried deep in the permafrost.

Professor Brian Cox concludes his exploration of our place in the universe by asking what next for the ape that went to space.

In northern Spain, he begins in a cave that was once home to our distant ancestors. Here, he discovers some of the earliest art in the universe - a child's hand painted onto the wall that has remained intact for around 40,000 years. That child - if raised today - would be just as bright and just as capable as any modern child. Yet its vision of the future would be very different to ours.

To understand what sets us apart, Brian heads to the Arctic. In Svalbard, he joins a group of people who are celebrating the midsummer sun. At these latitudes, the sun doesn't set for weeks on end. Brian shows how science is able to precisely predict the future passage of our star in ways our ancestors could not have imagined. The difference is that science has given us a vision of the deep future. It has shown us that we live in a clockwork universe where planets turn around stars in predictable orbits, stars around galaxies and the galaxies themselves are all falling through a probably infinite universe.

But powerful as science is at predicting the motion of the heavens, our future is far from certain. In Florida, Brian joins the latest efforts to protect Earth from potential catastrophic events. He joins a team of Nasa astronauts who are training for a future mission to an asteroid - should we ever discover one coming our way - under 30 feet of water in a submerged laboratory that simulates space. It is just one example of how, for our long-term survival, space exploration may well be vital. It is a view shared by Apollo 16 astronaut Charlie Duke, who tells Brian what it was like to escape the confines of the planet. It is a dream that both Nasa and now commercial companies share as they race to get humans back into deep space.

But space travel, like every leap our civilisation has ever made, requires energy. Here too, scientists are hard at work attempting to safeguard our future. At the National Ignition Facility in California, Brian witnesses the world's most successful fusion experiment in action. He believes that if their mission succeeds, our civilisation will have unlocked a way to the stars that will not destroy the planet in the process.

Brian concludes by returning to the top of the world in Svalbard, where he gains access to our civilisation's greatest treasure, locked away in a vault buried deep in the permafrost.

A Place in Space and Time

See all clips from What Is Our Future? (3)