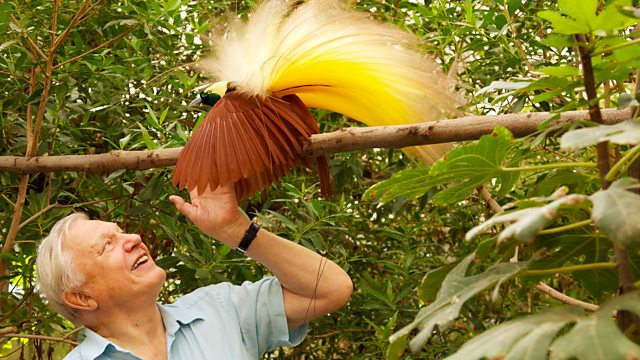 Documentary tracing David Attenborough's lifelong passion for birds of paradise, from the forests of New Guinea more than 50 years ago to the desert of Qatar today.

Birds of paradise are one of David Attenborough's lifelong passions. He was the first to film many of their beautiful and often bizarre displays, and over his lifetime he has tracked them all over the jungles of New Guinea. In this very personal film, he uncovers the remarkable story of how these 'birds from paradise' have captivated explorers, naturalists, artists, film-makers and even royalty. He explores the myths surrounding their discovery 500 years ago, the latest extraordinary behaviour captured on camera and reveals the scientific truth behind their beauty: the evolution of their spectacular appearance has in fact been driven by sex.And in a final contemporary twist to this story of obsession and royalty, he travels to the desert of Qatar, to a state-of-the-art facility which houses the largest breeding group of these birds in the world - a sheikh's very own private collection. There he has his closest ever encounter with a greater bird of paradise and its dramatic display, reliving the experience that captivated him in the forests of New Guinea more than 50 years ago.'For me birds of paradise are the most romantic and glamorous birds in the world. And this is a film I have wanted to make for 40 years.' - Sir David Attenborough.

Artist Errol Fuller's art work of birds of paradise, how these birds are represented in western art, and his own work with David Attenborough.

New discoveries are being made about one of nature's most stunning spectacles.

Sir David Attenborough narrates this slideshow about his lifelong passion.