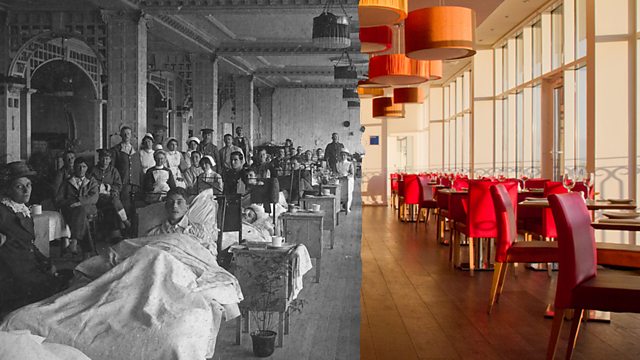 Several buildings in Southend-on-Sea were converted into hospitals during World War One, with the Palace Hotel being the most visual example. Dominating the seafront at the head of Southend Pier, it became the Queen Mary Royal Naval Hospital and treated over 4,000 soldiers during the war.

As they recovered from their injuries, the soldiers would gather on the balconies of the hotel to look out over the pier and seafront. They became something of an attraction, with dozens of people gathering underneath to pass tobacco, sweets, flowers and even buttons up to the soldiers.

Funds were raised through a series of “Gift Days”, when a VIP guest would attend to receive gifts which were then auctioned off. The VIP’s were often royalty – and in June 1915, Queen Mary herself was the guest of honour.

Manager of the Park Inn Palace Hotel, Denise Vas, looks out over the hotel balcony from where, a hundred years ago, the sailors did exactly the same as they recovered.

Location: Park Inn Palace Hotel, Southend-on-Sea, Essex SS1 2AL
Image: The large functions rooms in the hotel were turned into hospital wings, able to hold many beds. This wing was in what is now the hotel’s restaurant. Historic photograph courtesy of Ken Crowe.