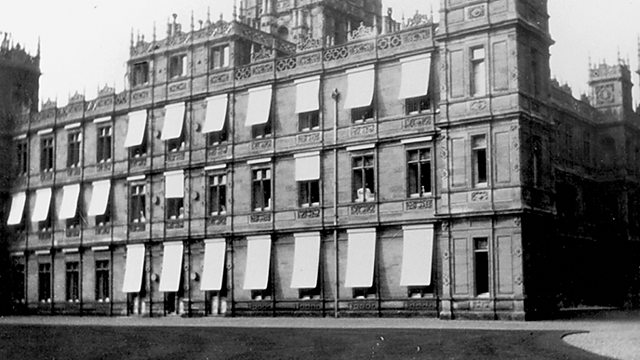 Highclere Castle was transformed into a hospital for injured soldiers by the 5th Countess of Carnarvon, Lady Almina, with financial help from her father, Alfred Rothschild. The Countess herself donned a nurses uniform and took on the role of Matron. She recruited 30 nurses, turned Arundel bedroom into an operating theatre, and appointed the family doctor as medical director.

Her idea was to treat the wounded men as house guests with the highest quality care and a taste of luxury. The hospital, which became a centre for orthopaedic excellence, treated up to 20 patients at a time and Lady Almina took a personal interest in their wellbeing and recovery. When the first soldiers arrived in September 1914, she was there to greet them personally. The Countess also made a point of sending a telegram to their family to let them know they were safe.

Blinds were placed on the south facing windows of the castle, which has become a familiar sight as the location of Downton Abbey.