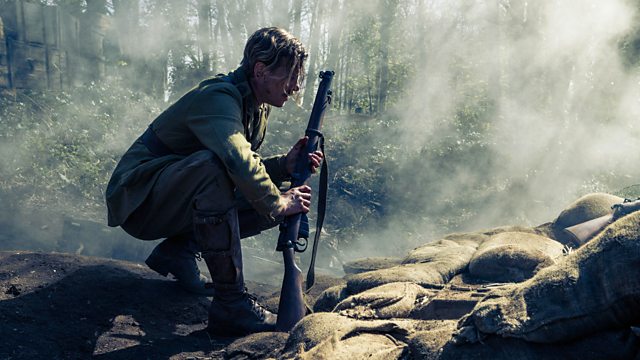 Our World War
Episode 1 of 3

Drama revealing real experiences of British soldiers in the First World War. In August 1914, the Royal Fusiliers reach the town of Mons in Belgium.

August 1914, two weeks after the First World War was declared. 80,000 British troops have arrived in southern Belgium, but they have yet to engage the enemy. Amongst these professional soldiers are the 4th Battalion, Royal Fusiliers, some of the best-trained gunners in the British Army.

Lieutenant Maurice Dease and his friend, Australian Lieutenant Fred Steele, command two companies of riflemen and machine gunners who find themselves camping overnight at Nimy Bridge, the northernmost point of the Mons-Conde Canal. The canal, surrounding the town of Mons, supports 18 bridges stretched along 20 miles of water - but everyone, including Private Sid Godley and his mate Private William Holbrook, expects to be crossing those bridges in the morning. Overnight, however, intelligence reports the Germans may be closer than the British think, and the Royal Engineers, including Lance Corporal Charles Jarvis and his sapper, Private Neary, are ordered to start preparing the bridges for demolition.

What happens next, on Sunday 23 August, tests the soldiers' skill, courage and ingenuity to the absolute limit, leading to the first Victoria Crosses of the First World War. Not everyone will make it through the First Day.

See all episodes from Our World War

See all clips from The First Day (2)