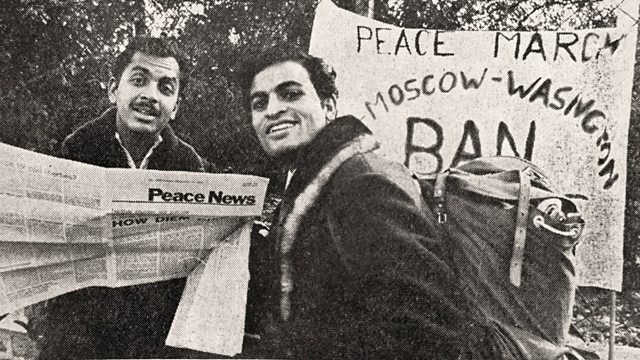 Satish Kumar relives his 8000 mile journey for peace, walking from New Delhi to Washington DC via Moscow, Paris and London, delivering packets of peace tea to the world's leaders.

Fifty years ago, at the height of the Cold War and at the time of increasing tensions between East and West, Satish Kumar hit headlines around the world when he walked 8000 miles from New Delhi to Moscow, then on to Paris, London and Washington DC delivering packets of 'peace tea' to the leaders of the world's four nuclear powers.

Satish Kumar relives his extraordinary journey - made without any money - that took him from the grave of Mahatma Gandhi to the grave of John F Kennedy. Along the way, he was thrown into jail and faced a loaded gun - as well as meeting some of the most remarkable people of the 20th Century.

In 1973 he settled in England, and became editor of Resurgence magazine, becoming the guiding light behind a number of ecological, spiritual and educational ventures.

Poet Lemn Sissay reads extracts from No Destination: Autobiography of a Pilgrim by Satish Kumar. He describes it as "One of the few life-changing books I have ever read".

Back to Charm School