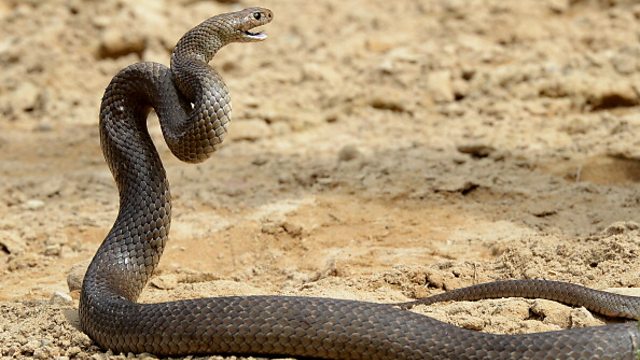 A Russian ‘chatbot’ programme has convinced judges it was human and scientists think they are a step closer to a universal snakebite treatment.

The University of Reading in England, this week claimed that a Russian ‘chatbot’ programme had passed the Turing Test, i.e it had convinced human judges that it was human and not a machine. But not everyone agrees that the Turing Test has been passed and even less so that this is a significant leap for Artificial Intelligence. Dr Murray Shanahan from Imperial is sceptical.

Snake bite treatment
Scientists think they are a significant step closer to the development of a universal treatment for snakebites that is quick and easy to administer. Almost 5 million people are bitten by snakes each year. The usual treatment is an antivenom, but that has to be given in a hospital via injection, and is often very expensive. There’s also an antiparalytic drug, neostigmine, but that has to be injected too. But with the vast majority of snakebites occurring in impoverished, rural populations with limited access to medical treatment, something better is needed. Dr Matthew Lewin is Director of the Center for Exploration and Travel Health at the California Academy of Sciences, he led the team behind the work and also tested the drug on himself!

GM Mosquitoes
Scientists have created mosquitoes that produce 95% male offspring, with the aim of helping control malaria. Flooding cages of normal mosquitoes with the new strain caused a shortage of females and a population crash. The system works by shredding the X chromosome during sperm production, leaving very few X-carrying sperm to produce female embryos. In the wild it could slash numbers of malaria-spreading mosquitoes, reports the journal Nature Communications.

Visual Overload
‘Inattentional blindness’ is a phenomenon where a person focuses so hard on something they do not notice what is right in front of their eyes. The classic example of this is the psychology experiment where people are asked to count how many times a group of people playing basketball team pass the ball. People concentrate so hard on this task that most of them do not notice a man wearing a gorilla suit wandering through the middle of the group. Magician Chris Cox tricks Claudia Hammond’s attention system and Nilli Lavie, professor of Psychology and Brain Sciences at University College London, explains what is happening in our brains when our visual system is overloaded.

Driverless Cars
Most traffic accidents are caused by human error. Engineers are designing vehicles with built in sensors that send messages to other cars, trucks, bikes and even pedestrians, to prevent collisions happening. The idea is to make the vehicles react to whatever's going on faster than the human drivers.
Jack Stewart drives around the university town of Ann Arbor, in Michigan, in some of the many vehicles that are fitted with experimental devices in the world's largest connected vehicles project. He finds out how the system works from researchers at UMTRI, the University of Michigan's Transportation Research Institute, including the director, professor Peter Sweatman and human factors expert Dr Jim Sayer, Kirk Steudle, Director, Michigan Department of Transportation and a resident who has had her car fitted with an experimental device.

Musicology
We are surprisingly good at remembering songs we haven’t heard for many years, but what is it about a song that makes it so memorable? Is there a perfect formula? Scientists hope that a new game will find out. A citizen science project plans to analyse thousands of results from the songs best remembered by the public. Adam Rutherford sings along and asks Dr Ashley Burgoyne, a computational musicologist from the University of Amsterdam, why some songs are more memorable than others.

Goal line technology
New goal mouth technology is been rolled out for this year’s football World Cup. The idea is to use high speed sensors to tell the referee whether or not the ball has crossed the line. Fresh back from testing the technology in all Brazil’s World Cup venues is Dr Colin Young from Labosport who talks to Gareth Mitchell.