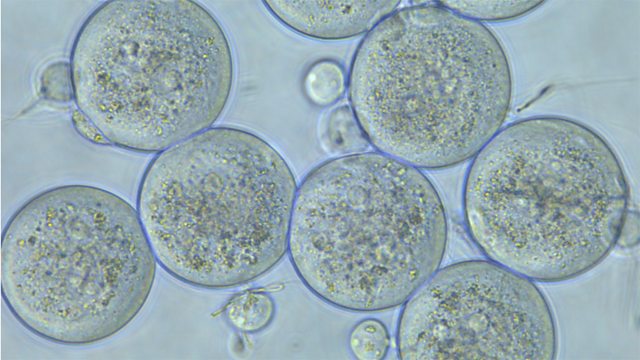 In 2005 researchers found the protein on sperm that enabled it to attach to the egg to fertilise. Now scientists have found the protein receptor on the egg that the sperm protein attaches to. Dr Allan Pacey explains the finding and the implications this could have for fertility treatments and contraceptive methods.

Russian Science Discussion
NATO and NASA have ended scientific relations with Russia, with the exemption of the International Space Station. Professor Edward Crawley and Professor Harley Balzer discuss the impact this will have on science in Russia. Professor Crawley is President of Skoltech (Skolkovo Institute of Science and Technology) in Moscow. Professor Balzer teaches International Affairs and Russian Politics at Georgetown University, Washington DC.

Birds in the Gulf of Mexico
It has been almost four years since the oil spill in the Gulf of Mexico and American scientists have estimated the number of birds killed by the oil. The researchers used several different datasets and two different approaches to come up with a realistic number, which fits well with bird counts done in the following years. Monika Seynsche reports.

Kepler-186f Earth Size Planet
Scientists have found a planet that could potentially have liquid water on its surface. Four other planets were found in the same area but they were less likely to be habitable as they were either too close to the star they orbit, so their water would evaporate, or too far so as the water would freeze. Professor Stephen Kane, astronomer from San Francisco State University, talks about the discovery.