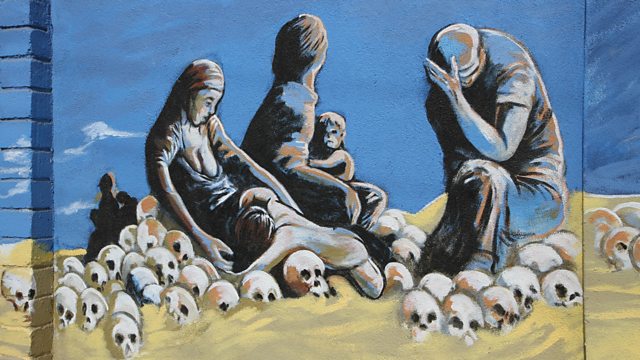 Will Grant travels to Tucson to meet the team tracing the families of undocumented migrants who died in the Arizona desert after crossing the US border illegally.

Each year, thousands of illegal Latin American migrants try to enter the United States via a treacherous journey across the Arizona desert. Some succeed, while others are captured by the US border patrol, and are immediately deported. But not everyone is so fortunate - many simply drop dead from exhaustion.

In Pima County, Tucson, anthropologist Robin Reineke works on identifying the deceased, piecing together clues found among the personal effects found on the decomposed bodies found in the desert. Her goal is to trace the dead migrant's family to inform them of their relative’s fate, and ultimately return the body home for burial.

In this programme, the BBC’s Mexico correspondent Will Grant travels to Arizona to meet Reineke and her colleagues at the Pima County Office of the Medical Examiner to learn of the challenges facing The Missing Migrant Project - Tucson has the third-highest number of unidentified bodies in the United States, with only New York and Los Angeles counting more.

One of the reasons cited for this rise in migrants dying in the desert is the continuing boom in US border enforcement, which began back in the 1990s. Today, the US government spends billions of dollars every year employing border agents who monitor checkpoints, CCTV, underground sensors and even unmanned aerial drones in order to protect the US border. The knock-on effect of this increase meant traditional urban crossing points became more heavily policed, and so illegal migrants were pushed into alternative routes through the wilds of the desert.

The BBC World Service heads out on patrol with the US Border Patrol, to witness the challenges they face and understand the financial and human cost of having to deal with scores of migrants - and drug traffickers - who try to cross the desert border on a daily basis. This tough approach is popular among many Americans, especially in Arizona which has some of the most stringent anti-immigration legislation in the United States. Although some locals have more sympathy, heading out into the desert to leave water, food and blankets for the desperate border-crossers.

In Mexico, we also meet some of the relatives contacted by Robin Reineke, and learn about the life-stories of those who have died as they went in search of the American dream. And, despite the risks involved, we meet young men and women from across Central and South America who are still willing to risk their lives embarking on this increasingly dangerous and potentially deadly trip.

The Man Who Went Looking For Freedom

Robin Reineke heads The Missing Migrant Project which is part of the Colibri Center for Human Rights based in Tucson, Arizona. Robin and her team work to identify the remains of dead migrants found in the Arizona desert.

Steve Johnston is a volunteer with No More Deaths. The organisation leaves water, food and clothing on known migrant trails in the Arizona desert, in hope of preventing more undocumented border crossers from dying.

The US government has spent billions of dollars enhancing its surveillance of the US border with Mexico, where the US Border Patrol watches for illegal border crossers and drug traffickers.