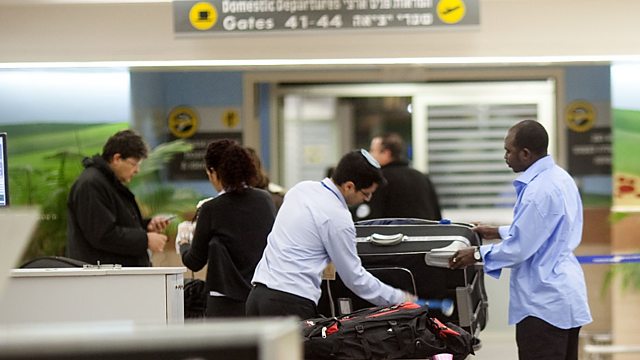 Israel and the USA

Airport security can be a hassle at the best of times, but in security-conscious Israel, it's taken to a whole new level. Marijke Peters tries to get her head around the baffling array of techniques employed by border forces at Tel Aviv's Ben Gurion airport.

In Philadelphia, a city with little success in American Football, citizens have to look for other sporting icons - even speed-eating. Tara Isabella Burton attended the Wing Bowl - an annual chicken-scoffing contest - in a crowd of 25,000 spectators. Could it live up to its billing?

Photo: A man is screened at a security check at the Ben Gurion Airport on December 13, 2010 in Tel Aviv, Israel.
Photo credit: Uriel Sinai/Getty Images

A Tale of Two Cities: Singapore and Melbourne