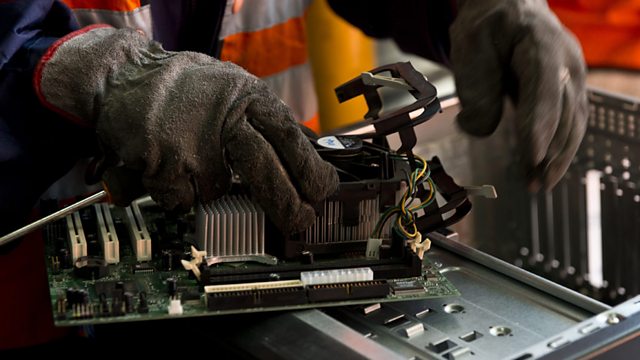 How do you make money from a pile of old rubbish? We investigate the world of globalised recycling and the vast profits being made from it.

How do you make a profit from a pile of old rubbish? Business Daily talks to the people who know how. Adam Minter is a journalist with an interest in rubbish. He has written a book called Junkyard Planet which charts the hidden world of globalised recycling and the vast profits that are being made from it. Some of the most valuable of all rubbish is computer and electrical waste. That's because it contains all sorts of rare and precious metals. Unfortunately it is packed in with other dangerous and hazardous materials that need to be handled with care.

It is Jim Willis' job to try and control how the world deals with such waste. He is head of the UN secretariat for the Basel, Rotterdam & Stockholm Conventions - a series of international agreements on how dangerous waste is disposed of. He says the inherent value of the material he works with is both a challenge and an opportunity. And we meet a woman who spends a lot of time rooting around in landfill sites, trying to uncover the secrets they hide. Kate Spencer of Queen Mary's college in London shows us her impressive rubbish collection.