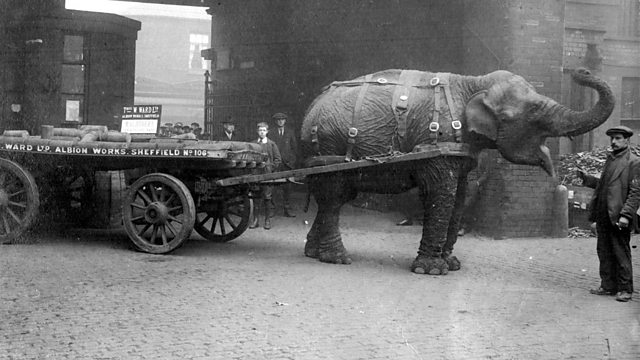 From 1916, an elephant called Lizzie was employed to haul heavy loads of steel and machinery through the streets of Sheffield. She worked for scrap merchant Thomas Ward Ltd based at Albion Works on Savile Street in Attercliffe.

The company was busy supplying a thousand tons of recycled metal every day to the country’s steel firms for the war effort. Ward’s own horses, like many others across the country, had been taken off to the front for use by the military.

Lizzie was leased from Sedgewick’s travelling menagerie. Its men had been called up for service and it faced restrictions on travel and shortages of feed. Lizzie was an Indian elephant and was stabled nearby at Lady’s Bridge. The records are full of anecdotes about her eating a schoolboy's cap, pinching food through a kitchen window using her trunk, and pushing over a traction engine.