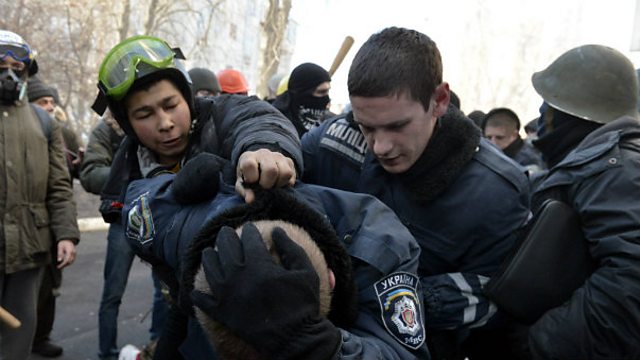 Oleg Karpyak reports from Kiev where a tense stand-off continues between thousands of demonstrators and riot police.

Oleg Karpyak brings us the latest from Kiev where a tense stand-off continues between thousands of demonstrators and the riot police trying to evict them from Independence Square. Also, are Chinese soldiers too fat for their tanks and too tall for their rifles? Introducing milk to the diets of China's schoolchildren in the mid-nineties has caused bones to develop like never before. Ed Gribbin, president of Alvanon, which advises the clothing industry, has just been commissioned to look into the problem by the government in Beijing.

Sean O'Neill is a travel writer with a terrific pedigree and he has been given exclusive access to the Marriott hotel chain's 'hotel design lab' - a three storey structure in which new hotel room designs are tested. Find out what he made of that enlightening experience.

Our special guest in Singapore, David Kuo of The Motley Fool, discusses expanding economies and expanding waistlines. And, in Washington, Brian Czech, president of the Center for the Advancement of the Steady State Economy, talks about alternative economic models and the perils of endless growth. Plus, in Calcutta, Rahul Tandon reports on stabilising India's population and the latest cinematic trends.