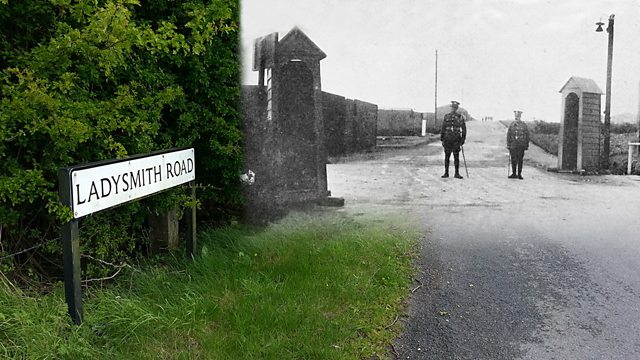 Chiseldon, near Swindon, was home to a training base for 8,000 soldiers. By war’s end, an enclosed, guarded hospital within the camp had 1,100 beds for soldiers with VD. The camp is part of the story of the army’s, and Britain’s, attitudes towards sex.

In 1914, when thousands of new recruits needed training; space and transport turned many sites like Chiseldon into sprawling army camps.

The village’s location on the Midland and Southwest Junction Railway, with its fast links south to the coast, and north to the Midlands, meant that Chiseldon camp grew quickly.

A camp hospital had been operational since July 1915, taking pressure off local civilian hospitals in Swindon and surrounds. Such was the demand for beds that the railway platform at the camp was altered so that ambulances could drive on, and off it.

In 1917, work began on converting part of the camp into a special hospital. So special, that it was cut off from the rest of the camp by a ditch on one side, a train line on the other, and fencing all the way around.

But those beds were not for battlefield injuries. Chiseldon’s “Bad Boys’ Camp” was for soldiers who had venereal disease (VD).

VD ravaged all combatants during World War One, which undermined discipline and fighting strength. A staggering 417,000 hospital admissions were recorded among British and Dominion forces by the end of the war. The drain on manpower was significant with each man infected requiring approximately a month’s treatment.

Inevitably, whilst it wasn’t widely publicised that the camp was for men with VD, its proximity to the local village meant that it didn’t stay a secret for long.

This is what led to the name, “Bad Boys’ Camp”, among the local population when explaining to innocent children why they should stay away from anyone they saw in ‘hospital blues’.

It took years for the true picture regarding venereal disease infection rates to come out.

Professor Mark Harrison specialises in the history of medicine at Oxford University: “By the end of the war, there were about 417,000 cases of VD in the military; at least the ones which were officially recorded through being admitted to hospital.”

Professor Harrison says the drain on manpower was significant with each man infected requiring approximately a month’s treatment. The infection rates in the British army, excluding those of the Dominions like Australia and Canada, climbed ‘inexorably’ apart from a blip in 1916. In the Somme area alone, the British saw 60,000 cases of VD by war’s end.

Furthermore, both society and the military were initially very unforgiving of those who were infected. Professor Harrison says he finds the use of full disclosure to a sufferer’s family ‘quite extraordinary’.

“At least for the first couple of years of the war, the authorities would notify the victim’s family of his admittance to hospital, and the nature of the complaint. That only stopped in 1916, after a major committed suicide after his wife had been informed of his infection. From then on, they just said that a man had been admitted with some kind of non-specific disease”.

Today, nothing remains of the “Bad Boys’ Camp”, nor of the rest of the camp, as traffic goes by from the M4 to Marlborough on the A346.

Modern-day commuters beetling northwards to junction 15 of the M4 motorway, or southbound to Marlborough, have little or no idea that to one side of the busy A346 lies on of Wiltshire’s less appealing WW1 memories.

Location: Chiseldon, Wiltshire SN4 0FH
Image shows the area where the camp was (then and now), courtesy of David Bailey, who also presents the story