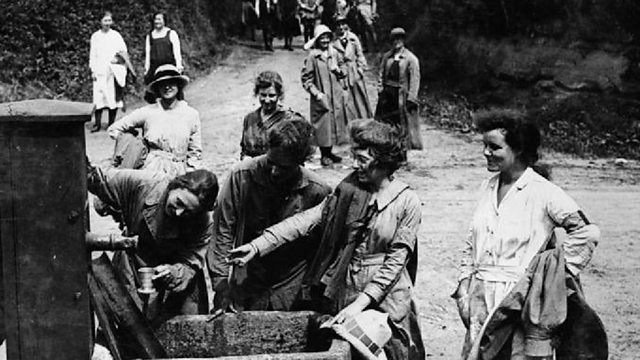 The Women’s Land Army during WW1

In 1918, Winifred Sandford was a 20-year-old trainee teacher from London when she answered the call and joined the Women’s Land Army. Lady Gertrude Denman (Baroness Denman) was appointed by the Government to organise the use of female labour at a time when many farmers resisted unofficial attempts to encourage them to take on women workers.

Winifred soon found herself working on a farm in the village of Barwick two miles south of Yeovil and close to the Somerset/Dorset border.

Winifred was just one of hundreds of ‘land girls’ who came to the Yeovil area during the war, but they didn’t rear livestock or plant food crops. Sleeping eight to a tent or in the open air if the weather was good, Winifred’s day job was hard and arduous.

During the harvest of 1918, she hand-picked flax which was taken away and made into cloth coverings for bi-planes. This was far from easy for the women working in the fields. As the plant matures, the seed heads form a sharp pin at the top which would regularly stick in to the hands of the harvesters. This hard physical labour often left Winifred and her friends with festering hand sores. In 1918 there was an influenza pandemic (often called the Spanish ‘flu) and some of the girls succumbed to the outbreak.

During her 10-week stay in Barwick, pulling flax for aeroplane construction, Winifred and the other 600 young women on the farm, earned a shilling a day (five pence).

As the war waged on across the Channel and around the globe, the fields near Yeovil resembled some kind of scout jamboree as about 75 bell tents went up to house the girls. There was no room for suitcases so the land girls carried all their possessions in ‘pilgrim’ or picnic baskets. They were young, inexperienced and many had never left the city before. Some were so naive they would be frightened of the farm cattle or to lay awake at night worried that their long hair might be eaten by the livestock.

The Land Army camp became something of a local curiosity for the townsfolk of Yeovil. At weekends large numbers of people would walk or cycle to Barwick to catch a glimpse of women living in the open air and wearing trousers, which was unheard of in polite society.

Once the war was over and the men of Somerset returned to the farms and small holdings, the task of the Women's Land Army was over. The vast majority of women returned to their home towns and cities. But their work wasn't forgotten and the legacy of World War One land girls can be found two decades later when the call for help went out once more. Winifred and her compatriots were the role models for the Women's Land Army and Timber Corps of World War Two. The story of the land girls and Lumber Jills of 1939-45 is better known and more richly documented, but its roots, inspiration and success lies in the work carried out in the fields and farmyards of World War One.

For thousands of years flax was at the heart of an important British industry. It was first cultivated in the Bronze Age. It was grown, harvested, spun and processed in to yarn for use as cloth or cordage. Today there is virtually no flax grown for use as cloth in Britain with just a single half-acre field used for commercial production in the entire country. But until the 1950s its straw-like stems and beautiful blue flowers were a common sight across Somerset and throughout England, Wales and Scotland.