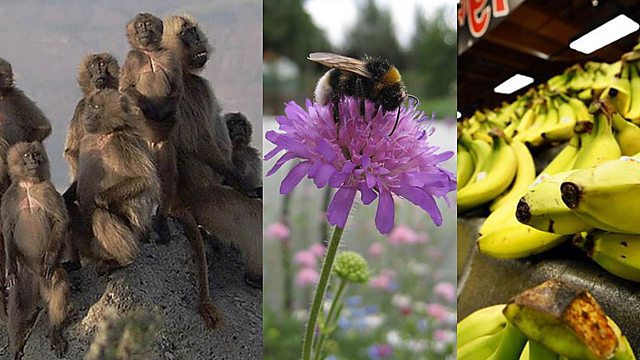 Coffee Rust Epidemic in Central America
An outbreak of leaf rust fungus devastated coffee plants in Central America in 2013, threatening thousands of farmers’ livelihoods. Coffee leaf rust is a disease that has been known to science since attacking the coffee industry in the 19th Century. But despite being recognised for over 100 years, relatively little is known about why the fungus is spreading now.

Bananas in Peril
Did you know that apart from local varieties in banana-growing countries, most of us eat the same type of banana which is exported around the world? The Cavendish, which replaced the Gros Michel after the deadly Panama disease wiped out many varieties in the 1950s, is under attack from a new strain of the fungus.

Bees Detect Electric Buzz
Bees have evolved to sense the signals that flowers use to advertise their delicious nectar and pollen. Colour, scent, and even ultra violet are known indicators for incoming bees. This year, researchers discovered that bumblebees can sense a flower’s electrical information too.

Are Wild Insect Pollinators as Important as Honeybees?
A large, international study published this year revealed that many wild insects are as effective at pollinating flowering crops as human-managed hives of honeybees. The researchers found that pollination techniques of wild insects led to twice as many flowers developing into mature fruits or seeds in some crops.

New Understanding in Primate Communication
We have known for a while that primates use verbal communication either in disputes over territory or in mating calls. This year several studies revealed the extent of conversation - and emotional connections - in bonobos, chimpanzees and marmosets.

Human-like Language in Monkeys
A bizarre sound made by a species of monkey, the Gelada, could help to reveal how human language evolved. Scientists say this is the first primate known to make calls that share certain features with human speech.