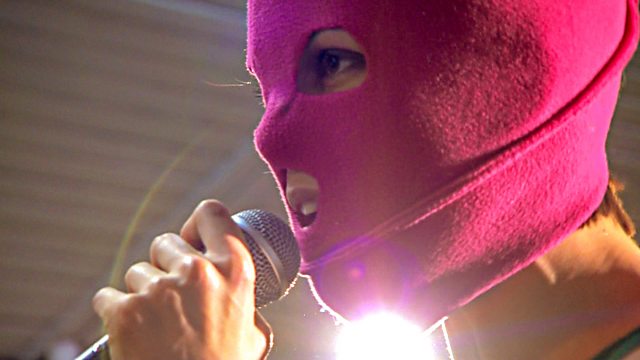 Documentary which tells the compelling story of how a group of young, feminist punk rockers known as Pussy Riot captured the world's attention by protesting against Putin's Russia.

Sundance award-winning documentary which tells the compelling story of how a group of young, feminist punk rockers known as Pussy Riot captured the world's attention by protesting against Putin's Russia. Through first-hand interviews with band members, their families and the defence team, and exclusive footage of the trial, it highlights the forces that transformed these women from playful political activists to modern-day icons. In early 2012, members of the collective donned their colourful trademark balaclavas and participated in a 40-second 'punk prayer protest' on the altar of Moscow's cathedral. Once arrested, Nadia, Masha and Katia were accused of religious hatred in a trial that triggered protests and arrests in Russia and caused uproar around the world. The film reveals the personal motives and courage of the women behind the balaclavas and exposes the state of Russian justice through the court's final verdict.

See all clips from Pussy Riot - A Punk Prayer (2)

The moment I saw photographs of Pussy Riot in Red Square back in January 2012 I knew we had to make a film with them.  Once they were arrested and put on trial we felt certain that this was a hugely important moment in Russian political history.  No one could have predicted exactly how significant this story was to become and indeed it is still growing.  And just wait till Nadia and Masha are released.

We moved in and started making the film immediately after their arrest that was back in March 2012 – we immediately had the support of Storyville and managed to make the film and raise funding as we went along.

What I was most surprised to learn is how incredibly radical Pussy Riot are in their politics.  I think a lot of people who support their cause, as victims of state repression, would be surprised to learn how uncompromising their brand of militant feminism actually is.  That’s what makes me admire them even more.  That and how funny they are. Humour is of course the most effective weapon we have when opposing any authority.

It’s surprising how the film does have a different resonance depending on the country it’s being screened.  For instance Russian and Ukrainian audiences don’t tend to laugh as much – I think they find the story just too tragic and the dark humour that Western audiences seem to find very funny is lost.

A Grin Without a Cat – Chris Marker’s masterpiece about the nature of revolution.

If it’s not probably impossible it’s not worth doing.

If money were no object, what is your dream documentary subject?

The complete history of mankind’s struggle for freedom and justice – or something like that.

The Battle of Algiers  -  Directed by Gillo Pontecorvo.

A Small Circus by Hans Fallada.