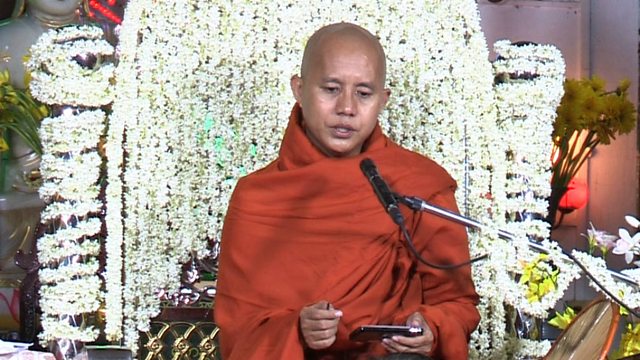 Heart and Soul 969 - How Burmas Buddhist Monks Turned On Islam

Wirathu, the Buddhist monk leading the anti-Muslim campaign of Myanmar.

To be a Muslim in Burma is dangerous. Thanks to an orchestrated campaign led by a Buddhist monk, the Muslim minority in Myanmar has been victimised and persecuted, and in some extreme cases members of the community have been killed.

Heart and Soul meets Wirathu. With his balding head and orange robes, he is the epitome of what the rest of the world thinks of when we imagine the monks of Burmese Buddhism, but the sermons he preaches are those of fear and violence against Muslims. He feels they want to become the majority in the country. He tells Heart and Soul:

“We are trying to create common ground so we can all live together. If they live in this country they must be loyal to the people and the country, then we can all live together. But if they continue doing as they are now, then that is not going to happen. To prevent this kind of situation we must keep the Buddhist population strong, that is my main purpose and intention.”

Jonah Fisher travels to his monastery as he searches for how the message preached by Wirathu fits with the ethos of Buddhism and how the Islamic population in this ancient country lives and worships under the threat of the Buddhists who seem intent on violently driving them from their country. Wirathu heads the 969 campaign to force people not to use Muslim businesses. The title of the campaign is deeply rooted in the Buddhist faith:

He asks Wirathu how two faiths have become enemies and why the calm and peaceful nature of Buddhism has been transformed into one of violence and hatred.