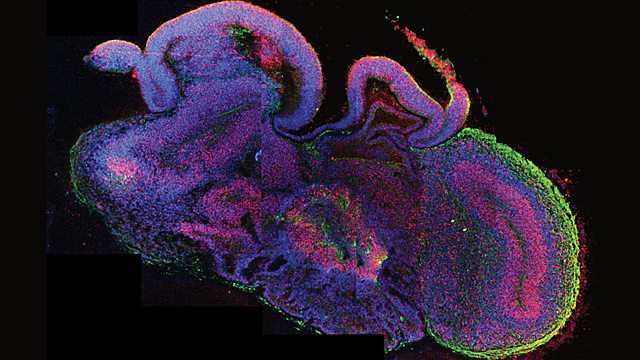 Growing a Brain in a Dish

Brain grown in a dish; Does being poor affect your mental acuity?; A new molecule to target MRSA; Why some birds need parental guidance for migration flights

A human brain culture has been grown in a petri dish which has distinct brain regions. These ‘brain parts’ have developed from human induced pluripotent stem cells (IPSCs). The culture is helping scientists study the neurological brain development disorder microcephaly. People with microcephaly have very small brains and heads and associated mental problems. It occurs in the foetus, when the stem cells do not multiply up sufficiently before differentiating into neurons to make the brain.
(Photo: A cross-section of an entire organoid showing development of different brain regions. All cells are in blue, neural stem cells in red, and neurons in green - Credit: Madeline A. Lancaster)

Money and Mental Acuity
As almost a fifth of the world’s population lives in households whose net income falls below the poverty line, it is no surprise that financial worries take up a lot of brain space. New research suggests that people worrying about finances are at risk for weakened cognitive capacity and this impairment can lead them to make decisions that slow or prevent long-term economic success.

A New Molecule to Target MRSA
Researchers at IBM’s Almaden Research Centre in California are working toward creating superbug-slaying “ninja particles”. These particles are polymer-based materials that destroy specific antibiotic resistant bacteria such as MRSA. After killing the bacteria, the particles degrade down to innocuous by-products, making these bug-busting molecules health friendly and highly effective.

Cultured Cranes
How much of a bird’s migratory route is innate and how much is learned through experience? An intensive conservation effort to recover North American Whooping Crane populations, following their near-extinction over the last century, is providing some valuable insight on the question. The research suggests that social learning from older birds plays a significant role in the cranes’ recollection and maintenance of migratory routes.