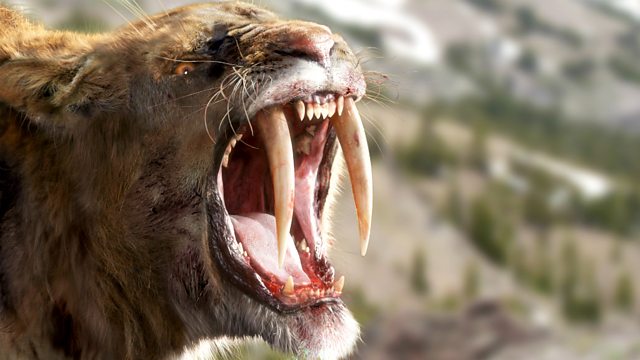 Land of the Sabre-tooth

Professor Alice Roberts goes on the trail of the great beasts of the Ice Age, beginning in North America - the hunting ground of the sabre-toothed cat.

Professor Alice Roberts journeys 40,000 years back in time on the trail of the great beasts of the Ice Age. Drawing on the latest scientific detective work and a dash of graphic wizardry, Alice brings the Ice Age giants back to life.

The Ice Age odyssey begins in the 'land of the sabre-tooth' - North America, a continent that was half covered by ice that was up to two miles thick. Yet this frozen land also boasts the most impressive cast of Ice Age giants in the world.

High in a cave in the Grand Canyon, Alice discovers the mummified excrement of the loveable, grizzly bear-sized Shasta ground sloth. Lying in the sands of Arizona are the shelled remains of a glyptodon, surely the weirdest mammal that ever lived. On the coastal plains of California, Alice encounters the vast Columbian mammoth, an animal far larger than any elephant today.

These leviathans all have one thing in common: they were stalked by the meanest big cat that ever prowled the earth, armed with seven-inch teeth and hunting in packs - Smilodon fatalis, the sabre-toothed cat.

See all clips from Land of the Sabre-tooth (2) 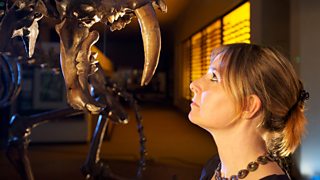 Find out all about the presenter of Ice Age Giants, Dr Alice Roberts.

TV Blog: how to film animated creatures in the wild 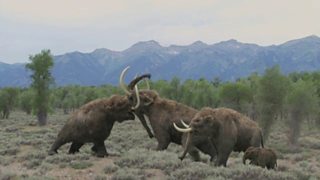 Producer Mags Lightbody blogs on how the ice age giants were brought to life.