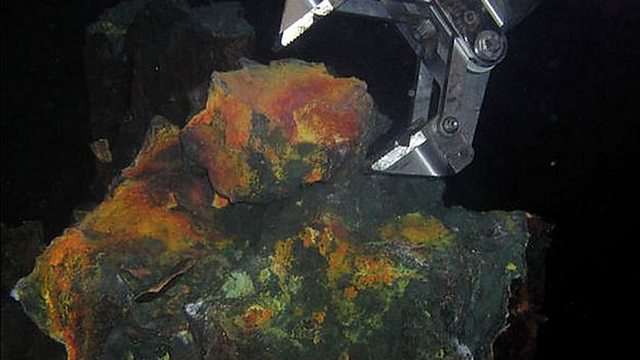 BBC science editor David Shukman explores mysterious and strange ecosystems in the depths of the oceans. He asks if they’re threatened by the embryonic deep sea mining industry?

The deep sea bed is the last great unexplored realm on our planet. Scientists have begun to find extraordinary ecosystems of creatures down there which exist nowhere else. These develop around submarine hydrothermal vents where mineral-rich water erupts from the seafloor at a temperature of 400 degrees Celsuis. These conditions allow unique and bizzare life forms to thrive but they also create rich mineral resources – such as high concentrations of copper, nickel and gold in the rock. In theory, around the world, trillions of dollars’ worth of metal ores lie on the deep sea bed. That is why a growing number of mining companies are exploring the ocean floor.

In Discovery the BBC’s Science Editor David Shukman joins a team of scientists on the British research vessel, the James Cook. They are investigating a newly discovered life- and mineral-rich ecosystem, five kilometres beneath the Caribbean sea with a robotic submarine.

David talks to some of the mining companies with ambitions to exploit the untapped mineral riches of the deep sea, and to the United Nations organisation which regulates commercial exploration and exploitation of the sea bed. Can deep sea mining be done commercially? What will be the scale of the environmental damage? Should we leave this mysterious region of the Earth untouched when we still know so little about it?

On the Trail of the American Honeybee 1/2