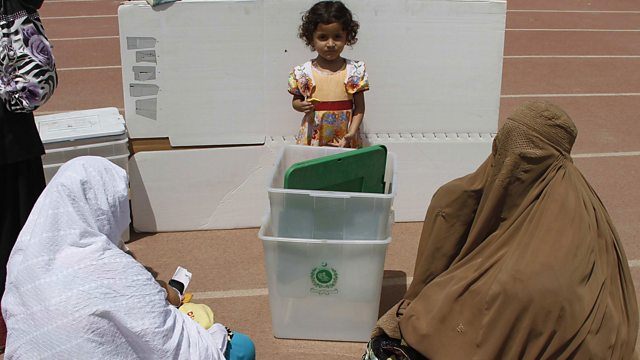 Pakistan at the Polls

This week Pakistan is going to the polls and BBC Urdu's Aamer Ahmed Khan has taken David Amanor into the lion's den - the bureau in Islamabad. This is your special guide to all things election.

ACRONYM EXTRAVAGANZA
Pakistani party politics is mired in maze of acronyms, so just mind your Ps and Qs. Plus, the battle of the symbols - the story of how the parties got their pictures.

I CAN HAZ MY TV BACK PLZ
Television channels in Pakistan are showing wall-to-wall party advertising - "paid political content". It's all a bit too much for Saba Imtiaz - she's desperate to have her TV back.

TRAILED BY THE ISI
On the campaign trail in Sindh, why Shahzeb Jillani and Almeena Ahmed give their perspectives from Karachi - including a run in with the Pakistani security services.

CHAI TIME
What do journalists in Islamabad talk about during their tea breaks? Aamer Ahmed Khan hobnobs with Irum Abbasi and Saba Eitizaz. No dunking please.

Stories From the Frontline: Reyhanli