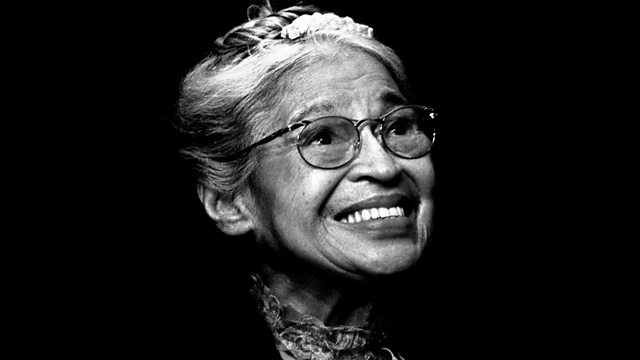 Rosa Parks's moment in history - refusing to give up her seat to a white man on a bus in 1955 - is celebrated as the birth of the civil rights movement in the USA.

Rosa Parks's moment in history - refusing to give up her seat to a white man on a bus in Montgomery, Alabama in 1955 - is celebrated as the birth of the civil rights movement in the USA.

Max Easterman offers a unique portrait of the woman who's simple act of defiance inspired Martin Luther King and civil rights activism across the world.

He speaks to those who knew her and worked with her, and to those who are inspired to carry her message around the globe in emerging societies and wherever minorities struggle to be heard.

We also hear a never before broadcast interview with Rosa Parks in which she tells biographer James Haskins what it was really like during the years of segregation in the Deep South.

She describes her upbringing and the events that led her to become a civil rights activist.

She dispels many of the myths that have grown up around her 'act of disobedience' for example, she reveals that she had already been active in bus boycotts for over a decade and that she believed even as a child that she was the equal of any white person. She gives grim accounts of life under Jim Crow, visits by the Ku Klux Klan, her grandfather sitting up at night with a shotgun to defend the household.

The 4 February 2013 is the centenary of the birth of Rosa Parks. Today She is celebrated as a very ordinary woman, who assumed an extraordinary place in the pantheon of modern American heroes after a simple act of defiance in an otherwise obscure southern US city.

As Max Easterman discovers, it was this simple act which set in train a complex series of events that led, ultimately, to the election of America's first black president.