BBC One
Penguins - Spy in the Huddle
Main content 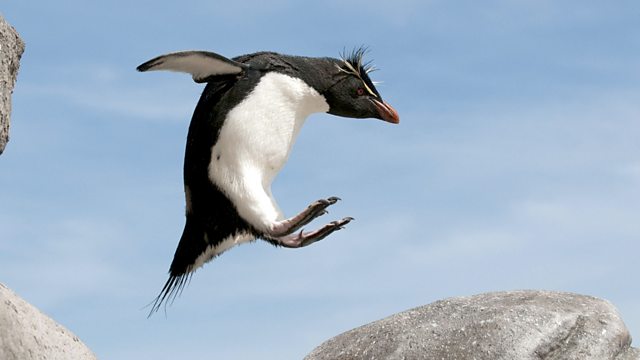 Penguins - Spy in the Huddle
Episode 1 of 3

Documentary showing penguins as they have never been seen before. From the Antarctic to the tropics, spy cameras capture unique footage of three extraordinary species.

Penguins as they have never been seen before. From the freezing Antarctic to the scorching tropics, 50 spy cameras capture unique footage of three extraordinary species.

Emperor penguins cross a treacherous frozen sea to reach their breeding grounds, and on the way one becomes lost in a blizzard. Once there, the females flipper-flight over the males and those that succeed waddle-walk with their partners. They must lay their eggs without touching the ice, but it is the males that face the greatest challenge - overwintering alone in the coldest place on earth.

Rockhoppers brave the world's stormiest seas, only to come ashore and face a daunting assault up a 300-foot cliff, hopping most of the way up. Having laid their eggs, these plucky birds face airborne attacks from skuas and vultures.

Humboldts are a strange tropical penguin that have rarely been filmed. To reach their desert nests they negotiate 20,000 predatory sea lions, dodge vampire bats and battle half a million sharp-beaked seabirds.

The hard work for all the penguins finally pays off when their tiny, vulnerable chicks begin to hatch.

Among the spy cameras capturing unique behaviour is a technological first - robotic penguins with cameras for eyes.

See all episodes from Penguins - Spy in the Huddle

See all clips from The Journey (3)