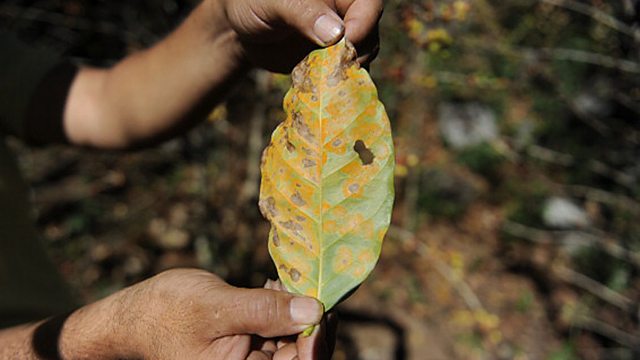 An outbreak of leaf rust fungus is devastating coffee plants in Central America, threatening thousands of farmers' livelihoods. Little is known about why the fungus is attacking now. Is the disease taking hold because of how the plants are grown, climate change or low genetic diversity in the genus? What solutions are there to save the coffee trade in the area?

Bats are special carriers of zoonotic diseases
Bats are known to carry viruses which can spread to other species, including humans. A study, in the Proceedings of the Royal Society, shows that on a species by species basis, bats are the most prolific hosts of these zoonotic viruses, including Ebola haemorrhagic fever and SARS. The reason why lies in their lifestyle, and the propensity of many bats to mingle with other species of bats.

Supernova secrets revealed
Astronomers scanning the skies observed the death throes of a dying star. Forty days later the star, called SN2010mc, went supernova. Supernovae only occur when a super-massive star runs out of fuel for nuclear fusion and its core becomes a dense ball of iron, which succumbs to the giant forces of gravity. This rare observation will hopefully shed light on this mysterious process.