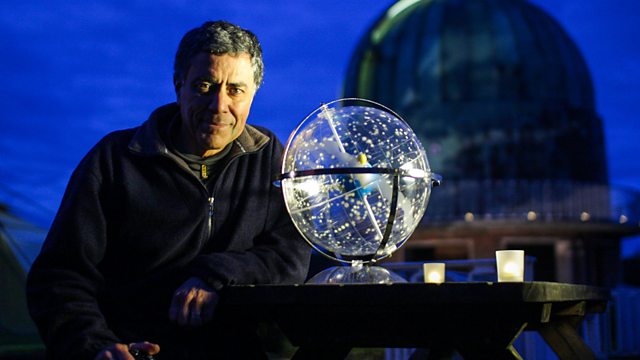 The story of the stars, from red giants and supernovae to black holes, and how discovering their tale has transformed our own understanding of the universe.

This is the epic story of the stars, and how discovering their tale has transformed our own understanding of the universe.

Once we thought the sun and stars were gods and giants. Now we know, in a way, our instincts were right. The stars do all have their own characters, histories and role in the cosmos. Not least, they played a vital part in creating us.

There are old, bloated red giants, capable of gobbling up planets in their orbit, explosive deaths - supernovae - that forge the building blocks of life and black holes, the most mysterious stellar tombstones. And, of course, stars in their prime, like our own sun.

Leading astronomers reveal how the grandest drama on tonight is the one playing above our heads.

See all clips from Seven Ages of Starlight (3)

A star is born

Stars are born in the vast clouds of dust and gas that lurk in deep space – some of the coldest, darkest places there are. It’s a process that can take millions of years, but every day, somewhere, a new star lights up. Just how this happens is a chain of events studied by Professor Serena Viti.

This is the prime of a star’s life, and the phase that our own Sun is in – just like 90% of all the other stars in the sky. While from Earth the Sun looks like a perfect golden orb, the scientists who know it better, like Dr Helen Mason, have uncovered it isn’t nearly as serene as it seems.

Dr Robin Catchpole has tracked the development of some of the largest, most bloated stars in the Universe: red giants. Stars so puffed up they’re almost coming apart at the seams. Their story reveals the fate of our own Sun, and of planet Earth itself.

When white dwarfs were first discovered their incredible density baffled astronomers. A whole new form of physics – quantum mechanics – had to be invented before scientists could even begin to make sense of them. Professor John Ellis describes them as retired stars, cluttering up the Universe.

Professor Alex Filippenko is a Supernova Hunter. As stars live their lives over millions or billions of years we don’t see them change. The exception is if a star goes supernova – these rare explosions can brighten dramatically over the course of just one night. They’re the deaths of the most massive stars, but they also hold the key to the composition of the Universe.

The first evidence for neutron stars was a strange repetitive signal from outer space – one so unexpected that the team that picked it up even considered aliens as its source. The sender turned out to be the equivalent of a cosmic lighthouse: a type of neutron star called a pulsar.  Professor Douglas Leonard specialises in studying these stellar tombstones, and the most ones mysterious of all... black holes.

Scientists believe black holes to be the ultimate end to a star. It is complete destruction by gravity. It is to some extent a theory, but Professor Douglas Leonard thinks he’s seen the creation of one of these mysterious objects in space. Some scientists even suspect that black holes could hold a key to understanding the creation of the Universe itself.