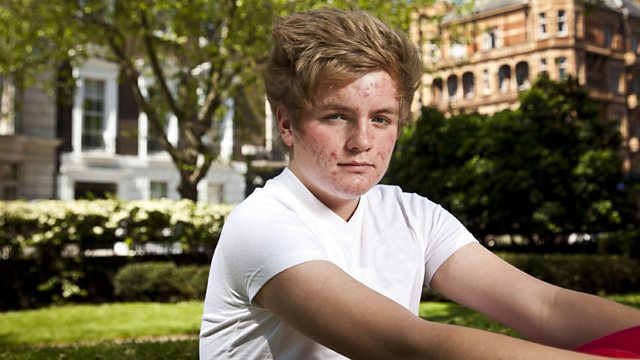 In 2011 Jesse Jones went missing. After five days his body was found. He was suffering from acute depression and believed a commonly prescribed acne drug was to blame.

In 2011 24-year-old Jesse Jones went missing. After five days his body was found at a local beauty spot in Dorset. During the search for Jesse it emerged that unbeknownst to his family, he was suffering from acute depression and believed a commonly prescribed acne drug, was largely to blame.

85% of young people get spots but for some, bad skin can take over their lives. Jesse's story provides the backbone for this moving and revealing film as Gemma Cairney and Jesse's father, Derek Jones, the director go on an emotional journey to look at how acne impacts on young people in the UK.

In her search to find out just how bad this battle can be Gemma meets people all over Britain who are fighting their own war with acne and asks how far some people will go for clear skin.

Along the way they meet sufferers who are battling with their skin and the doctors and dermatologists who are helping them fight it. They examine what treatments are available. With side effects that can be as minor as dry lips but as extreme as liver damage and depression, Gemma speaks to people who have used the same acne drug and looks into some of the pros and cons of taking it.

Does changing your body make you happy?

Dying For Clear Skin is part of a season of BBC Three programmes exploring body image.

Get info on all the shows, plus extra clips, links and content over on the Body Beautiful Season page.

If you or someone you know is affected by the issues in this programme around acne, skin conditions and depression, there are organisations that can help.

See a list of groups offering information and support

Find out more about the condition from Radio 1 Advice, BBC Health and the NHS; including treatment and how to deal with it.