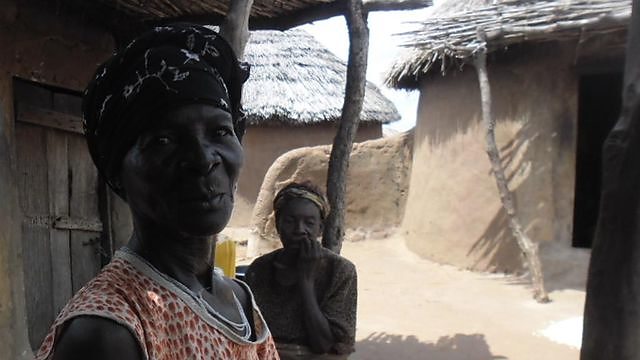 No Country For Old Women

Kati Whitaker has been given rare access to Northern Ghana's witch camps, where old women accused of witchcraft are banished.

Elderly women in Ghana are being banished to remote camps, exiled from their homes, ostracised from their communities and left to fend for themselves – sometimes never again to see their families. And all because someone somewhere accused them of being a witch.

At any one time there are around a thousand such women languishing in appalling conditions in six isolated camps in the impoverished North of Ghana.

Kati Whitaker has been given rare access to Ghana's witch camps where she has followed the fortunes of some of these women.

We meet 82 year-old Samata as she arrives at the camp and undergoes ritual cleansing. Also 62 year-old Awabu, formerly a successful clothes seller, who now survives on the peelings from other people's cooking. We also witness the welcome return home to her village of one lucky woman. But not all are so fortunate and for many their exile is a life imprisonment for those who protest their innocence. We step inside two of these witchcamps to discover what life is really like for these women.

We also uncover the many social, economic, religious and even psychological reasons why this is still happening in an apparently modern progressive nation such as Ghana - uncovering the complex roots behind the labelling of old women as witches.

And we consider whether - far from being a throw back to traditional belief systems - a belief in witchcraft is an essential part of what it means to be a modern African.