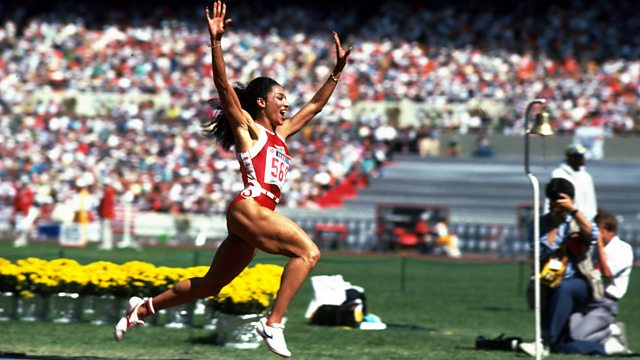 American sprint legend Florence Griffith-Joyner is remembered by her husband and coach Al Joyner. He describes her 100m and 200m medal wins at Seoul in 1988.

At the Seoul Olympics in 1988, the American sprinter Florence Griffith-Joyner was the first American woman to win four medals in a single games - golds for the 100m, the 200m and the women's 4×100m relay, and a silver for the women's 4×400m relay. She achieved world records in both her 100m and 200m which still stand to this day.

Flo-Jo, as she was nicknamed, was also famous for her flamboyant nails and unique dress sense.

In a rare interview, Flo-Jo's husband Al Joyner, remembers her achievements and premature death in 1998.

This programme broadcast in June 2012.

Derek Redmond - Never Give Up