Lopa Kothari and Jameela Siddiqi present highlights from the Darbar Festival of Indian classical music, held last month at Kings Place in London. Featuring a morning raga from the powerful voice of Arati Ankalikar-Tikekar, and a sarod recital from Alam Khan, who as the son of Indian legend Ali Akbar Khan, has to balance his 500-year heritage with an upbringing in contemporary California. This is the first of a pair of programmes from this year's Darbar Festival. The Darbar Festival is the biggest event of its kind in Europe: artists from both North and South Indian musical traditions were presented in fourteen concerts over the Easter weekend - a special feature of Darbar is that the concerts are held across the day from morning until night, allowing for the different ragas to be heard in their true time context. Lopa Kothari and Jameela Siddiqi will be bringing their own expertise and insights to these programmes, as well as talking to the performers themselves. 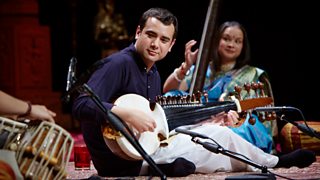 This gallery is from

See all galleries from World Routes (56)