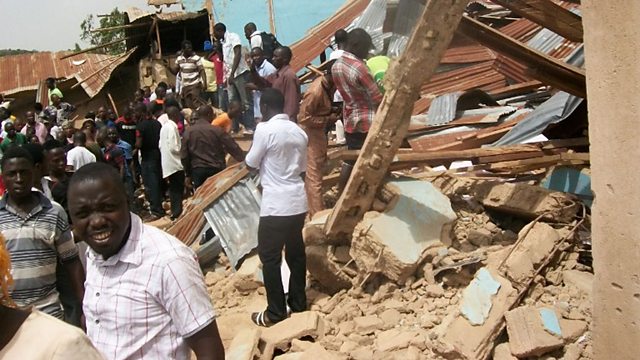 Nigeria is in crisis, but how much is religion to blame? Reverend Ernie Rea discusses with a panel of experts.

On Sunday June 10, Islamic militants attacked two churches in the central Nigerian city of Jos, killing at least one and wounding more than 50. Reprisal attacks claimed the lives of six more people.

It is the latest tragedy in an escalating religious feud in Nigeria. In recent months, the radical group Boko Haram has killed hundreds of people, targeting Christian churches and universities in its quest for a state run strictly along Islamic lines.

Nigeria is oil rich but half of its people live in poverty. Corruption and mis-management is rife, but it is also said to be one of the most religious countries in the world.

Joining Ernie Rea to discuss the role of religion in the conflict in Nigeria are Dr Jameel Yusha, senior lecturer in media and politics at Northumbria University, Dr Steven Pierce, lecturer in the history of sub-Saharan Africa at the University of Manchester and Dr Leena Hoffman, who has just completed her PhD on democracy and patronage politics in Nigeria at the University of Birmingham.

(Image: People gather outside the ruins of a church targeted by a suicide bombing in a church in Jos on June 10, 2012. Credit: AFP Photo / Getty Images)

The President vs The Church