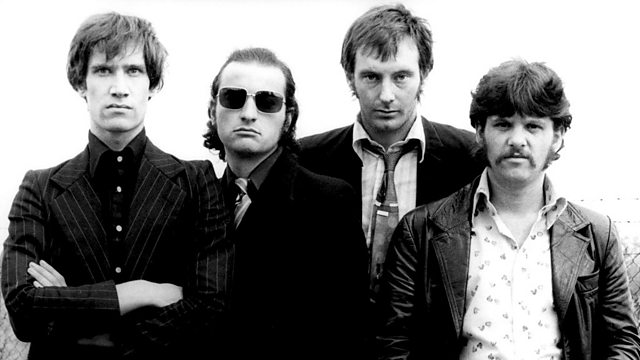 Series about the history of punk rock begins with the precursors to the likes of the Sex Pistols and the Clash - pub rockers such as Dr Feelgood and Ducks Deluxe.

Narrated by Peter Capaldi, this opener of a three-part documentary series in BBC FOUR's celebrated 'Britannia' strand is scheduled to chime with the 35th anniversary of the Queen's Silver Jubilee and the arrival of punk as national and then international music culture. The film explores the road to punk in Britain, which begins in the early 70s with a young generation already conscious that they have 'missed the 60s party' and are stuck in a Britain heading for economic woes and dwindling opportunities. Meanwhile the music of the day - prog and super rock - seems to ask not for their interest and involvement, but only their awe and their money.

But before the punk generation finally arises to have its say during 1976 come a group of pub rockers, a generation of bands sandwiched between 60s hippies and mid-70s punks who will help pave the way towards the short, sharp shock of punk, only to be elbowed aside by the emergence of the Sex Pistols, the Clash et al.

An unlikely cast of characters set the scene for punk in early 70s Britain. Reacting against overblown super rock of the day and the glam their younger sisters like on Top of the Pops, pub rock set the template for punk. Small venues, fast retro rock 'n' roll and bags of attitude typified bands like Dr Feelgood, Ducks Deluxe, Kilburn and the High Roads and Eddie and the Hotrods. These bands engendered a small London scene which is sometimes forgotten and helped define the Pistols, the Clash and the Damned, both positively and negatively.

See all episodes from Punk Britannia