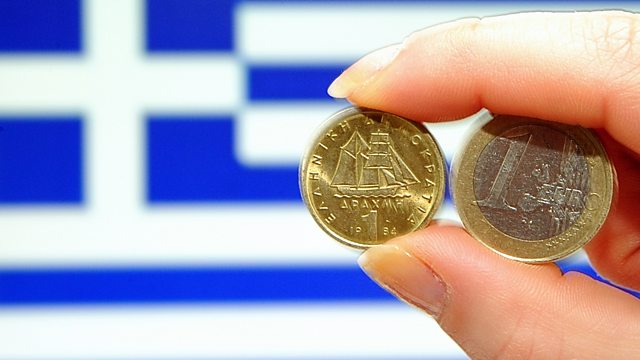 The Documentary Europe's Choice
Episode 2 of 3

Allan Little looks at the failure to enforce the rules of the Stability and Growth Pact.

Allan Little looks at the key moments and issues which brought the EU to the current crisis.

In this episode he focuses on the first years of the last decade.

"The Stability and Growth Pact": the mechanism with the most boring name and yet the most crucial of purposes - to keep the Euro in check.

Its low inflation, low debt criteria had been arrived upon as a means to trying to ensure a German-style fiscal probity amongst the 12 countries that had joined the Euro by 2001 - many more than many privately thought suitable for entry.

But there was no external enforcement mechanism for the rules - the Commission could recommend action but couldn't compel it.

In effect, when countries contravened, it was up to ministers of member states to police the pact.

When Germany - one of the European superpowers - broke the rules in 2003 under the strains of paying for re-unification, it was not penalised.

Why? Did this send a fatal message to countries like Greece and Italy that they too could bend the rules without consequence?

(Image: A person holding a one euro coin and a Greek one drachma coin in front of a Greek national flag. Credit: Philippe Huguen/AFP/Getty Images)