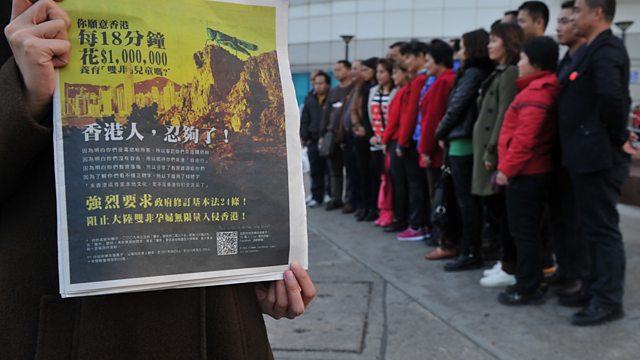 Expectant mothers from the Chinese mainland are flooding into Hong Kong, hoping to give birth in the territory so their children can reap the benefits of Hong Kong citizenship. It's one of the latest sore points between Hong Kongers and mainland Chinese – officially they live in the same country, but with different cultures. Juliana Liu, who grew up on the mainland but is now based in Hong Kong, reports from the city.

Say yes to the dress!

Reggie Nadelson visits a New York emporium that has been catering to brides-to-be for more than 70 years. Kleinfeld's has more than 1,500 dresses, and they cost an average of $6,000 each. Yet the high prices don't put off women from New York - and much further afield - from hunting for a perfect outfit for their wedding day.

(Image: A girl holds a Hong Kong newspaper with an anti-mainland China advertisement with a picture of a locust looking over the Hong Kong cityscape. Credit: AFP/Getty Images)

Off the coast of Somalia and under the Caribbean Sea