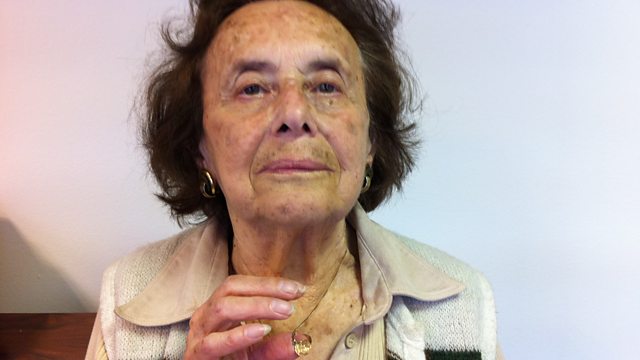 They survived what is still widely regarded as the worst crime in history, and they know that their own time to die is drawing near.

Holocaust survivors, now in their eighties and nineties, meet every day in North London at the world's first Holocaust Survivors Centre of its kind.

Jane Little spends a day with them and hears stories of enormous resilience, unfailing optimism, and unexpected humour.

Among others, she meets

Susan Pollock, who arrived at Auschwitz aged just 13, carrying a sewing machine on her back;

Lilly Ebert, who to this day wears the gold necklace her mother gave her, which she managed to hide in the death camp;

Freddie Knoller, who despite all that happened to him, is very clear that he believes in God and loves being a Jew.

But what do Jewish religious practice and the Yiddish culture of the shtetl mean to the other surivvors as their numbers dwindle?

And why is it that the soup at the centre is always thick and steaming hot?

Photo: Lilly Ebert shows the angel necklace which she hid in her shoe at Auschwitz.

In God We Trust