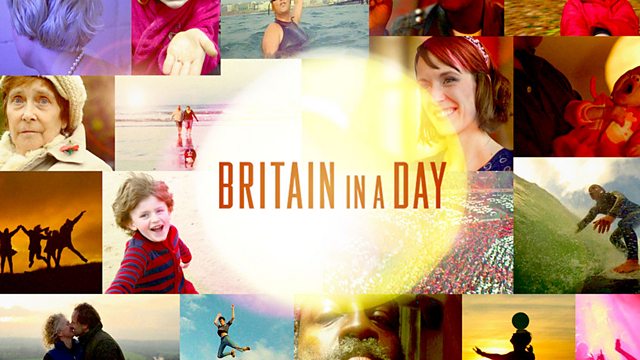 Britain in a Day

Following on from the film Life in a Day, this film tells the fascinating story of the British public through their own words and footage, captured on Saturday 12th November 2011.

On Saturday 12 November 2011, an eclectic range of British people turned the camera on themselves, capturing the entertaining and mundane, the exciting and unusual, the poignant and the everyday. The result, Britain in a Day tells the fascinating story of the British public in their own words.

Following on from the feature film Life in a Day, this 90-minute film directed by BAFTA winner Morgan Matthews offers an extraordinarily candid look at 21st-century life across the UK, crafted from over 750 hours of footage, including 11,526 clips submitted to YouTube. The documentary offers remarkable insight into the lives, loves, fears and hopes of people living in Britain today. This captivating self-portrait of Britain forms part of the BBC's Cultural Olympiad.

After Britain in A Day premiered on BBC Two, an immersive online archive was launched to showcase the full-length submissions the film is comprised of.

See all clips from Britain in a Day (8)