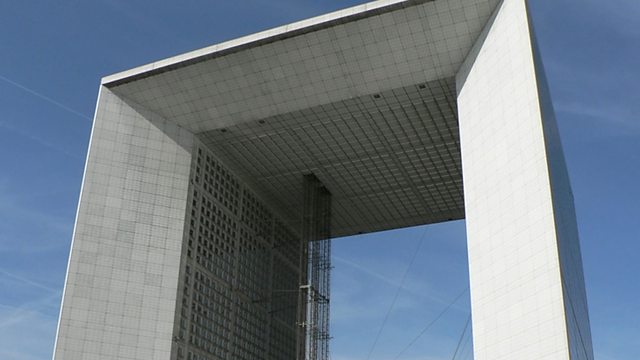 From globular cartoon characters to curvy cars, or natural shapes such as pine cones and gherkins, the blob has always been part of our landscape.

In the finale to this series, Marcus du Sautoy examines The Blob. From globular cartoon characters to curvy cars, or natural shapes such as pine cones and gherkins, the blob has always been part of our landscape. But now they are taking over our cities, as architects have adopted the computer technology used in car design and animation.

Marcus talks to architect Zaha Hadid who has done a number of curvy buildings from the Innsbruck Ski Jump to the tram Station in Strasbourg whose car park mimics the swirls of a magnetic field. Plus the Contemporary Arts Centre in Cincinnati which has curves so tempting they have had to put up a sign saying 'no skateboarders'. Hadid explains how new technology has facilitated the design of these sites, backed up by her childhood liking for maths and trigonometry.

Closer to home, think of or the new Selfridges building in Birmingham or the Swiss Re on the River Thames - nicknamed The Gherkin by locals. Marcus talks to two of the mathematicians behind the Swiss Re and finds that they smoothed out the edges on computer to create a shape that was both beautiful yet functional.

But if we now have the software to make perfect designs, do we still need mathematicians to work out equations at the drawing board? Without a doubt. Although computer technology is a great facilitator, in the wrong hands it can lead to bland buildings being designed at the push of a button. If we want to keep uniqueness, we need mathematicians more now than ever.