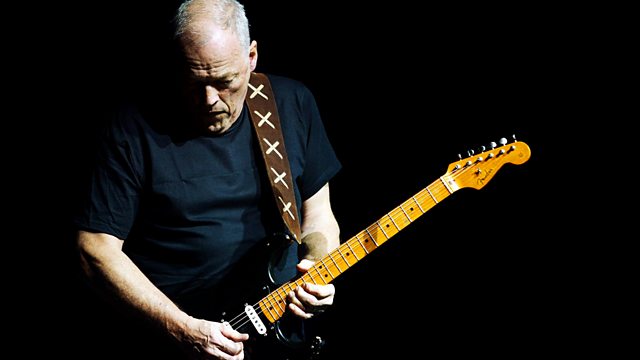 Sue Lawley's castaway this week is David Gilmour of Pink Floyd. Gilmour grew up in Cambridge, where his father was a senior lecturer in zoology and his mother was also a lecturer and film editor. He was educated at a private school, in the hope that he would shine academically, but he really wanted to be playing music with his friends at the local state school, the County. At 16 he left and went to the Cambridge Tech where he became friends with Syd Barratt, the legendary founder of The Pink Floyd Sound, as they were originally known.

Pink Floyd went on to become one of the most successful bands of all time with albums such as Animals, Meddle and Wish You Were Here, and most famously, The Dark Side of the Moon and, later, The Wall. Dark Side of the Moon has remained in the best-selling albums chart ever since its release 30 years ago and has racked up some 35 million copies sold worldwide. The records were as groundbreaking in their presentation as their music, and the covers, designed by Storm Thorgerson, became iconic in their own rights: the man on fire on Wish You Were Here, the flying pig over Battersea power station on Animals, the black gatefold with a prism streaming light on Dark Side of the Moon. Pink Floyd concerts became a byword for spectacle through the 1970s and 1980s with lights and lasers and special effects.

Since the seventies, David Gilmour has also worked solo and guested with Bryan Ferry and Paul McCartney among others. He has several charitable interests, recently selling his mansion in Maida Vale to Earl Spencer and donating the £4.5 million to Crisis, a homelessness and housing charity. In 2001 he performed a mainly acoustic selection of his and Pink Floyd's songs at Robert Wyatt's Meltdown on the South Bank. He lives on 300 acres of land in Sussex with his second wife, writer Polly Samson and four of his eight children.

Favourite track: Dancing in the Street by Martha and the Vandellas
Book: An English translation of the Koran
Luxury: An acoustic Martin D.35 guitar