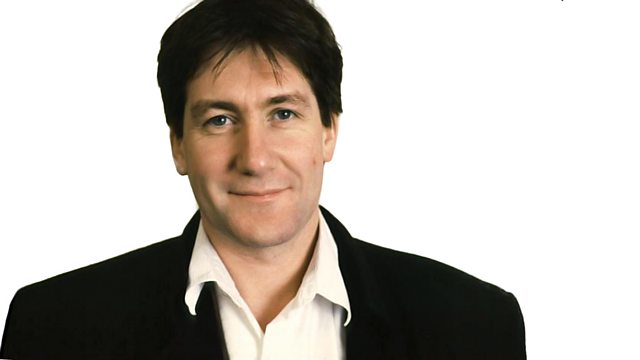 Sue Lawley's castaway this week is the composer George Fenton, whose work includes music for Groundhog Day, Shadowlands, Cry Freedom, The Company of Wolves and The Fisher King. Born George Howe in South London in 1950, he taught himself to play the guitar at the age of eight and by the age of 14 was playing the organ - "dreadfully"! He wanted to be an actor, and got an early break in Alan Bennett's play Forty Years On. As time went on, however, he found directors were always asking him to play an instrument, so he switched to music as his main focus. He got his first job as composer and musical director for a production of Twelfth Night at the RSC in Stratford in 1974. Eight years later, and still almost entirely self-taught, he was nominated for an Oscar for his score for Richard Attenborough's Gandhi. It was only his fourth attempt at film music.

Since 1982 he has been nominated for four more Oscars (for Cry Freedom, The Fisher King and Dangerous Liaisons) and three Golden Globes; he's won three BAFTAs, two Ivor Novello Awards and an EMMY and written music for more than 100 television productions including Bergerac, The Jewel in the Crown, Talking Heads and The Blue Planet. In addition he cornered the market in jingles for daily news bulletins across the BBC. George Fenton is a visiting professor at the Royal College of Music in London, and regularly appears on television arts shows and documentaries as an authority on music.

Favourite track: On Going to Sleep from Four Last Songs by Richard Strauss
Book: Short Stories by Anton Chekhov
Luxury: A piano or, failing that, for comfort a tin of condensed milk & tin opener