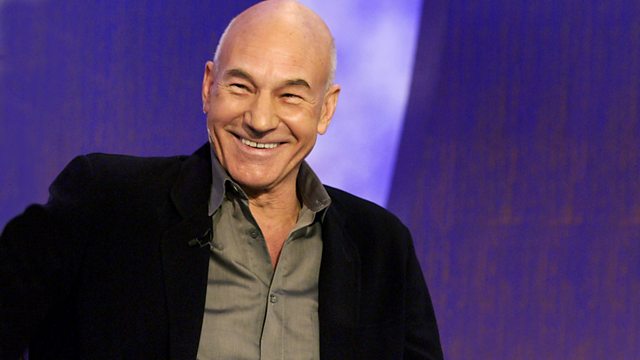 Sue Lawley's castaway this week is the actor Patrick Stewart

Patrick Stewart had to wait a long time for fame. The Shakespearean actor was nearly 50 when he was offered the role of Captain Jean-Luc Picard in the TV series Star Trek: The Next Generation. Contrary to predictions, the programme was a huge hit, and Patrick Stewart's famously bald cranium was on posters, duvet covers and Star Trek memorabilia the world over. Patrick was born in Mirfield, Yorkshire, a town with a passion for amateur dramatics. The youngest of three brothers, he grew up watching performances by the all-female drama company to which his mother belonged. After a disastrous stint as a reporter, Patrick went on to work in repertory theatre around Britain, and then to a successful career with the RSC, during which he won an Olivier Awardfor his portrayal of Shylock in The Merchant of Venice. After seven series at the helm of the Starship Enterprise, he has returned to Britain and to his first love, the theatre. He is currently appearing in David Mamet's A Life in the Theatre in London's West End.

Favourite track: Serenade for Tenor, Horn and Strings by Benjamin Britten
Book: A compendium of the world's best science fiction
Luxury: His beloved billiard table and a shed to keep it in