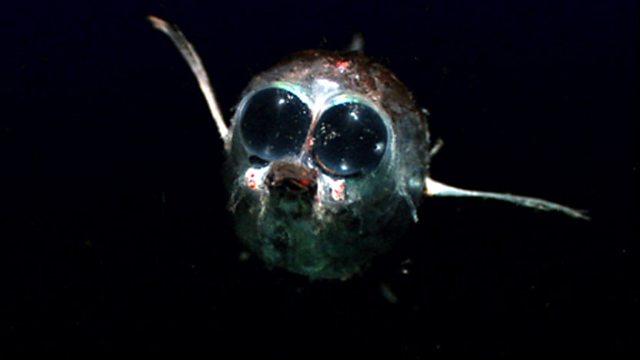 The evolutionary arms race to see and not be seen is played out in the gloomy ocean depths.

With predators everywhere, survival in the twilight zone is all about seeing but not not being seen. Hatchet fish are experts at playing hide and seek. They have the large, sensitive eyes needed for seeking prey, but their bodies are flat, and they have sides which are highly silvered. Head on they are just visible, but as they turn, their mirrored sides reflect the light from the surface and they disappear into the gloom. Viewed from the side, whole shoals can hide in this way. But what about from below? The tubular eyes of many predators down here in the gloom are able to distinguish their prey silhouetted against the scarcely detectable glimmer of light from above. Hatchet fish, however, have a way of confusing any eyes that might be searching fro them from below. Using photophores along their underside, they can exactly match the colour of water coming from above - this counter-shading breaks up their outline from below, and makes them almost invisible. Almost... the enormous yellow lenses of one predator enable its owner to distinguish between light from the sun and that from photophores. So, one device for escape is countered by an equally subtle one for attack in an evolutionary arms race that has been waged for millions of years. 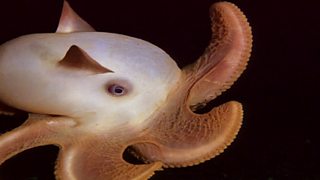 More clips from The Deep

See all clips from The Deep (9)

More clips from The Blue Planet

See all clips from The Blue Planet (58)