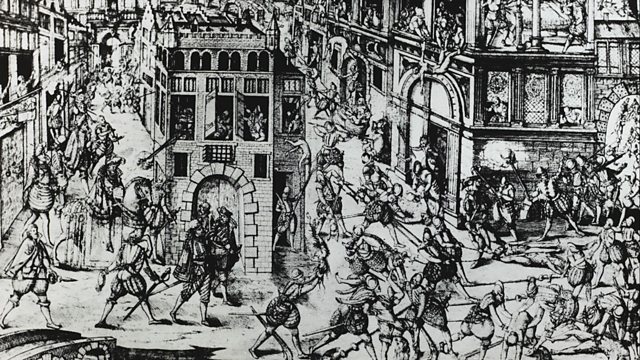 Melvyn Bragg and guests discuss the infamous St Bartholomew’s Day Massacre. In Paris, in the high summer of 1572, a very unusual wedding was happening in the cathedral of Notre Dame. Henri, the young Huguenot King of Navarre, was marrying the King of France’s beloved sister, Margot, a Catholic. Theirs was a union designed to bring together the rival factions of France and finally end the French Wars of Religion. Paris was bustling with Huguenots and Catholics and, though the atmosphere was tense, the wedding went off without a hitch. And as they danced together at the Louvre, it seemed that the flower of French nobility had finally come together to bury its differences.That wasn’t to be: on St Bartholomew’s Day, four days after the ill-starred nuptials, so many Protestants were killed in the streets of Paris that the River Seine ran red with their blood. Was the wedding a trap? Who was to blame for the carnage and what impact did it have on the Reformation in Europe?With Diarmaid MacCulloch, Professor of the History of the Church at Oxford University and author of a new book: Reformation: Europe’s House Divided 1490-1700; Mark Greengrass, Professor of History at the University of Sheffield; Penny Roberts, Lecturer in History at the University of Warwick.