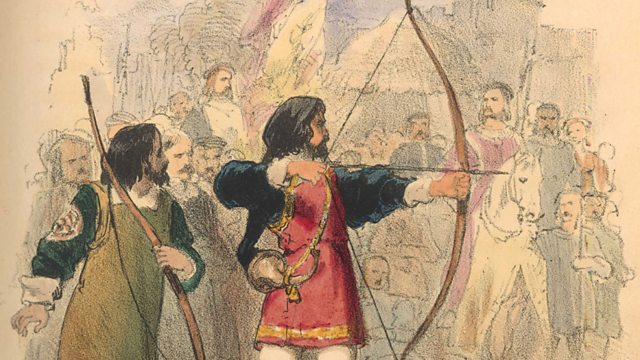 Melvyn Bragg discusses the centuries old myth of the most romantic noble outlaw. Was he a yeoman, an aristocrat, an anarchist or the figment of a collective imagination?

Melvyn Bragg and guests discuss the centuries old myth of the most romantic noble outlaw. The first printed version of the Robin Hood story begins like this:“Lithe and Lysten, gentylmen/That be of frebore blodeI shall tell of a good yeman/His name was Robyn Hode/Robyn was a proude outlawe/Whyles he walked on groundeSo curteyse an outlawe as he was one/Was never none yfound”.Robin Hood is described as a ‘yeoman’ – a freeman, and though he is courteous there is not even a hint of the aristocrat he later became. In fact, in the early ballads there is no Maid Marian, no Friar Tuck, Robin does not live in the time of bad Prince John, or the crusades, does not lead a large and merry gang, and certainly never robs the rich to give to the poor. Though he always remains a trickster, and a man with a bow in a wood.Why does this most malleable of myths go through so many changes and so many centuries? And was there ever a real outlaw Robin Hood on whom the ballads, plays, novels and movies are based?With Stephen Knight, Professor of English Literature at Cardiff University and author of Robin Hood: A Mythic Biography; Thomas Hahn, Professor of English Literature at the University of Rochester, New York; Dr Juliette Wood, Secretary of the Folklore Society.