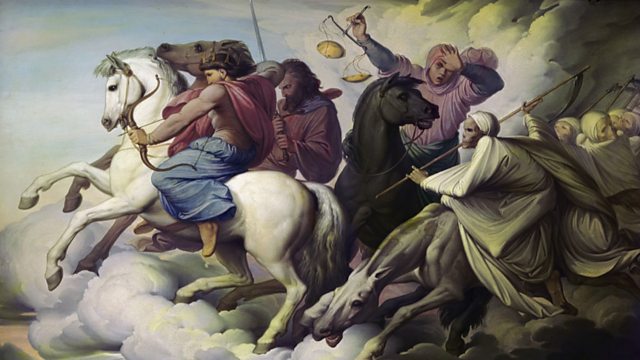 Melvyn Bragg discusses how this powerful narrative of judgement and retribution evolved, and how it still shapes our thinking on the deepest questions of morality and history.

Melvyn Bragg and guests discuss the Apocalypse. George Bernard Shaw dismissed it as “the curious record of the visions of a drug addict” and if the Orthodox Christian Church had had its way, it would never have made it into the New Testament. But the Book of Revelation was included and its images of apocalypse, from the Four Horsemen to the Whore of Babylon, were fixed into the Christian imagination and its theology. As well as providing abundant imagery for artists from Durer to Blake, ideas of the end of the world have influenced the response to political, social and natural upheavals throughout history. Our understanding of history itself owes much to the apocalyptic way of thinking. But how did this powerful narrative of judgement and retribution evolve, and how does it still shape our thinking on the deepest questions of morality and history? With Martin Palmer, theologian and Director of the International Consultancy on Religion, Education and Culture; Marina Benjamin, journalist and author of Living at the End of the World; Justin Champion, Reader in the History of Early Modern Ideas at Royal Holloway College, University of London.