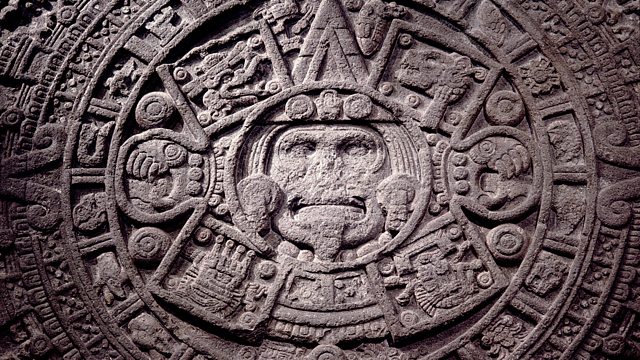 Melvyn Bragg discusses the creation, power and legacy of the Aztec Empire, arguably the most ruthless, pre-Hispanic empire in North America which, at its zenith, ruled over 6 million people.

Melvyn Bragg and guests discuss the Aztec Empire. According to legend, the origins of it lie on a mythical island called Aztlan - "place of the white herons" - in the north of Mexico. From there this nomadic group of Mesoamericans are said to have undertaken a pilgrimage south to the fertile valleys of Central America. In the space of just 200 years, they formed what has been called the largest, and arguably the most ruthless, pre-Hispanic empire in North America which, at its zenith, was to rule over approximately 500 small states, comprising by the 16th century some 6 million people. Was it military might and intimidation alone that helped the Aztecs extend their power? What part did their complex belief system play in their imperial reach? Their use of human sacrifice has been well documented, but how widespread actually was it? How easily were the Spanish conquistadors able to Christianise this empire? And what legacy did the Aztecs leave behind that lives on in our world today?With Alan Knight, Professor of the History of Latin America at Oxford University and author of Mexico: From the Beginning to the Spanish Conquest; Adrian Locke, co-curator of the Aztecs exhibition at the Royal Academy of Arts; Elizabeth Graham, Senior Lecturer in Mesoamerican Archaeology at University College London.