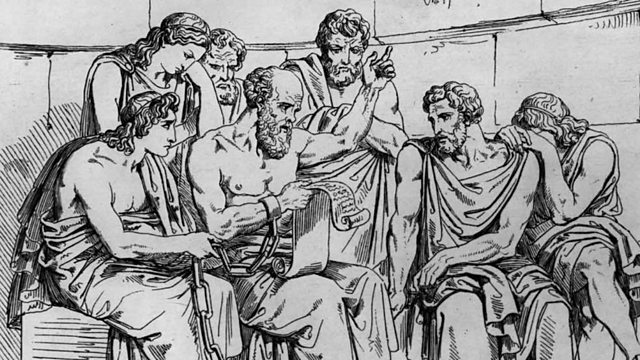 Melvyn Bragg discusses what self-examination through philosophy can teach us about living our lives, and where it ranks in our quest for self-knowledge alongside science, the arts and religion.

Melvyn Bragg and guests discuss self-examination. Socrates, the Greek philosopher of the 4th century BC, famously declared that "The unexamined life is not worth living." His drive towards rigorous self-enquiry and his uncompromising questioning of assumptions laid firm foundations for the history of Western Philosophy. But these qualities did not make him popular in ancient Athens: Socrates was deemed to be a dangerous subversive for his crime, as he described it, of "asking questions and searching into myself and other men". In 399 BC Socrates was sentenced to death on the charge of being "an evil-doer and a curious person". Two thousand years later, the novelist George Eliot was moved to reply to Socrates that "The unexamined life may not be worth living, but the life too closely examined may not be lived at all". For Eliot too much self-scrutiny could lead to paralysis rather than clarity. What did Socrates mean by his injunction? How have our preoccupations about how to live altered since the birth of ancient Greek philosophy? And where does philosophy rank in our quest for self-knowledge alongside science, the arts and religion? With Dr Anthony Grayling, Reader in Philosophy, Birkbeck, University of London; Janet Radcliffe Richards, Philosopher of Science and Reader in Bioethics, University College, London; Julian Baggini, Editor, The Philosopher’s Magazine and co-editor of New British Philosophy: The Interviews.