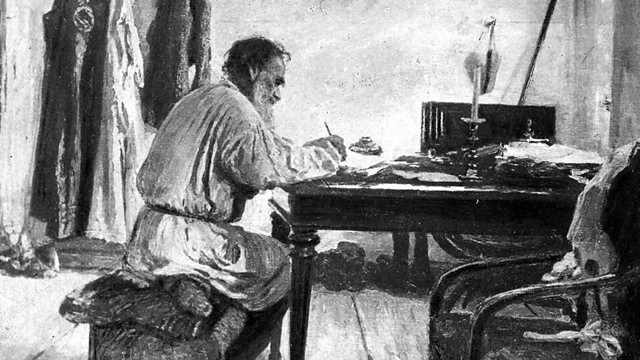 Melvyn Bragg discusses the life and times of the 19th century Russian writer Leo Tolstoy, whose novels such as War and Peace gave expression to the compelling moral and social questions of their day.

Melvyn Bragg and guests discuss the life and work of the 19th century Russian novelist Leo Tolstoy.The Russian novel has been acclaimed as one of the outstanding genres of literature alongside Greek Tragedy, Shakespeare’s Plays and Romantic Poetry. Its heyday was the mid-19th century, and its practitioners gave expression to the compelling moral and social questions of their day - and arguably of the modern era. These men of genius included Dostoevsky, Gogol and Turgenev, but perhaps the greatest of them all was Tolstoy, author of the novels War and Peace and Anna Karenina. Tolstoy took massive subjects and presented them in loving and intricate detail. As Matthew Arnold said, "a work by Tolstoy is not a piece of art but a piece of life". Possessed by an urgent desire to represent real life in his work, and to reject artifice, Tolstoy declared that "The one thing necessary in life as in art is to tell the truth." What did Tolstoy mean by telling the truth? How did he convey these truths to the reader? And why did he, ultimately, give up on literature and concentrate instead on religious and political philosophy? With A N Wilson, Novelist, journalist and biographer of Tolstoy; Catriona Kelly, Reader in Russian, Oxford University; Sarah Hudspith, Lecturer in Russian, University of Leeds.