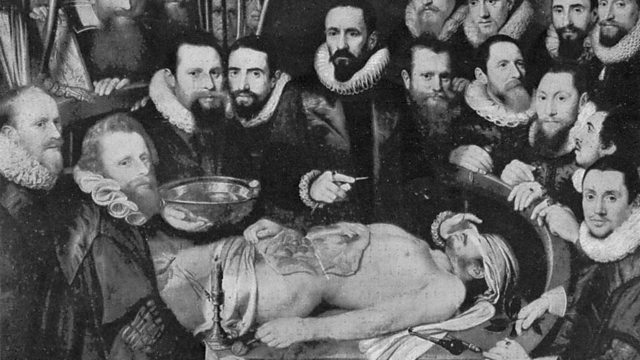 Melvyn Bragg discusses the 2000 year old history of mankind's attempt to understand the human body and the role that science, religion and art have played in that pursuit.

Melvyn Bragg examines the history of mankind's quest to understand the human body. The Greeks thought we were built like pigs, and when Renaissance man first cut his sacred flesh it was an act of heresey. We trace the noble ambitions of medical science to the murky underworld of Victorian grave robbing, we trace 2000 years of anatomical study. From the great showman Vesalius, enthralling the Renaissance Artists in the operating theatres of Italy to the sad and gruesome pursuits of Burke and Hare, Anatomy is mankind's often frustrated attempt to understand the body of man. What role has science, religion and art played in the quest to understand the male and the female body?With Harold Ellis, Clinical Anatomist, School of Biomedical Sciences, King's College, London; Ruth Richardson, Historian, and author of Death, Dissection and the Destitute, Phoenix Press; Andrew Cunningham, Wellcome Trust Senior Research Fellow in the History of Medicine, Department of History and Philosophy of Science, Cambridge University.